The Little Radio Station That Could!

By now you probably realize you have discovered a very special website. Behind this site thrives an innovative, original and fresh radio station run by dozens of hosts with an unmatched passion for radio.

LA Talk Radio is the brainchild of Sam Hasson, a Southern California entrepreneur who set out to realize his lifelong dream of hosting his own radio show, in an industry that has standardized on big-name hosts and celebrities.

But he knew he had to follow his desire to be heard by people who have become bored by formulaic radio and talking DJs.

In the winter of 2007, Sam met a couple of California entrepreneurs who had already been broadcasting radio programs over the Internet on their their own radio station. The idea of delivering radio over the Internet led Sam to envision a new and different kind of a radio station, one that would offer its listeners a variety of original programs with great entertainment value.

Sam was impressed with that Internet radio station, but noted the station’s focus on spiritual programming. What he had in mind, however, was a mainstream radio station that offered a variety of light, entertaining programs in the form of live streaming and on-demand listening.

Sam decided to go it alone. On January 1, 2008, he set out to carry his vision forward and to form a small Internet radio station that featured talk that listeners could easily relate to and enjoy while working or surfing the Web at home.

On February 4, 2008, BBS Talk Radio was launched in a small but comfortable office in a luxurious high-rise building in downtown Los Angeles. Broadcasting from the 36th floor with a panoramic view of LA was so exhiliarting, that several hosts quickly jumped on board.

With three daily shows and six weekly shows, the new station began broadcasting 24 hours a day and quickly gained recognition among listeners who discovered the station mostly by word-of-mouth. After the first day of broadcasting, one critic called us “monkeys with microphones.”

The station quickly grew as more talented people discovered the station and launched their own radio shows. All new hosts were encouraged to produce their own material and say whatever they want, however they want. This created a relaxed, creative environment that has brought the station’s hosts together and led to shared effort.

On June 4, 2008, the young station was renamed LA Talk Radio and relaunched as a completely independent Internet radio station that would bring listeners around the world the flavor of LA and Hollywood. Soon hosts from outside Los Angeles joined in and added flavor from other parts of the country.

On January 5, 2009, LA Talk Radio introduced a second channel to provide even more new hosts with the opportunity to broadcast their programs on the radio. With an unprecedented ranking on Google, thousand of links to the website, and continually growing traffic, the station now broadcasts over 80 shows for every taste and interest.

This is the story of a group of incredible people who wanted to show the world how entertaining radio can be! Together, our past, current, and future hosts have created a truly exciting destination for radio listeners who want real, honest talk without the confines of government regulation.

LA Talk Radio continues to grow and expand its show lineup, offering you even more reasons to come back for more.

Irreverent. Entertaining. Cool. That is the vision. 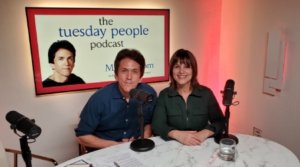 Inspired by the worldwide No. 1 bestseller Tuesdays with Morrie, join Mitch Albom as he

All we try to do is bring you positive music and a positive message. No

About Your Goal Guide and the D*E*B METHOD: One of the biggest reasons goals fail